This is the final post in a 5-part blog series on Gender and the Environment by Caroline Nguyen. The opinions expressed in this article are of the author’s, and are not necessarily reflective of the views of GreenPAC.

I am only seeing one thing—that I am moving in the right direction.

My mother and I are very different people. While we usually get along, there are certain topics that we have to avoid, like my lack of dresses and love of rap. Ultimately, our main source of disagreement is over how we think women should act: my mom, the traditionalist, believes that women are supposed to be elegant, quiet, family-oriented, and above all, non-conflictual, while I disagree on and lack almost all of these characteristics.

Her ideas about women are not unique. When we face discrimination, we are often told things along the lines of “that’s just part of being a woman”, “to deal with it”. Being silent, however, does little to rectify these issues. To my mom’s chagrin, staying put won’t make men stop harassing me on the bus or grant me equal pay for equal work. The same can be said about environmental sexism. As I have explored throughout this blog series, the injustices that women face in agriculture, policy-making, crisis management and leadership often take place in conditions where women are less able to speak out or are silenced completely.

At the same time, the resilience of strong female figures, like native rights and environmental activist Winona Laduke, primatologist and wildlife figurehead Jane Goodall, and the longest serving Director the the Environment Protection Agency Carol Browner, demonstrates that women can make their voices heard, even if the path looks daunting. 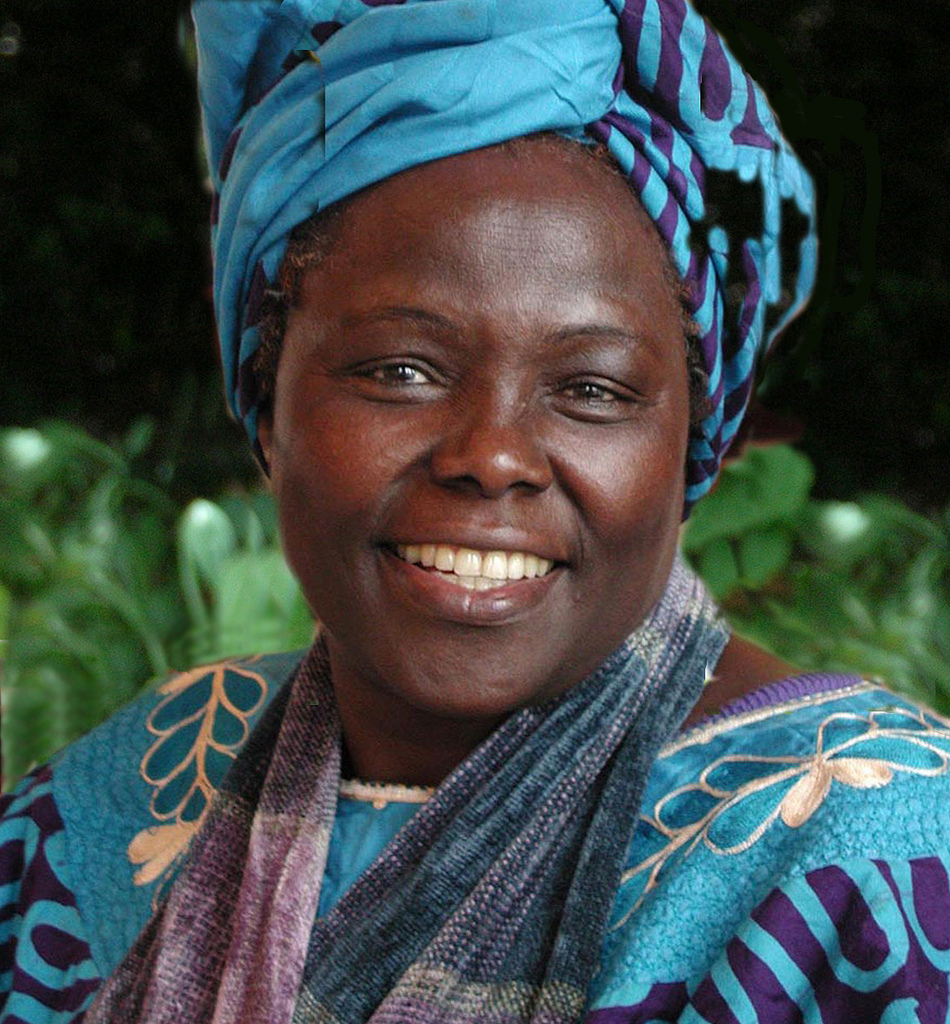 Perhaps no other female environmentalist’s work shows this as well as the life of my environmental inspiration, Wangari Maathai.Here is a woman who started from the bottom and worked her way to become a leading voice in politics and academia on the world stage. As the founder of the Green Belt Movement in Kenya, an initiative to encourage local women to plant trees in their hometowns, she was the first woman in East and Central Africa to earn her doctorate degree, get elected into the Kenyan Parliament with 98% of the vote, and eventually become the first African woman to receive the Nobel Peace Prize in 2004.

But her official autobiography hides many of the struggles she faced as a woman in environmental activism. In a piece she wrote for Speak Truth to Power, a book on activism in 2000, she talks about how she was threatened with genital mutilation, beaten by police, confined in a church crypt for a year in hiding, and jailed by authorities. Even her husband had divorced her because she was “too educated, too strong, too successful, too stubborn and too hard to control”. Maathai’s life, whether she knew it at the time or not, embodied the values of ecofeminism, which advocates for equity for women in environmentalism, both in leadership and in how green policies affect our lives.

When asked how she found the drive to continue onwards despite these obstacles, she gave the following advice:

A lot of people say, “They could kill you.” And I say, “Yes, they could, but if you focus on the damage they could do, you cannot function…” You are not projecting that you could be killed, that you could die. You are not projecting that they could cut your leg. If you do that, you stop. It’s not like I see danger coming, and I feel danger. At this particular moment, I am only seeing one thing—that I am moving in the right direction.

It’s no secret that sometimes, women have it hard. But it’s also no secret that when women speak and act against the restrictions we face, both in environmentalism and other fields, we can accomplish meaningful, non-discriminatory policies and become influential leaders and role models. Time after time, even when we face the most harrowing of circumstances, we have found a way to continue on and make our voices heard.

Female strength and resiliency: these are traits on which my mother and I would agree.

Caroline Nguyen is an intern at GreenPAC, and a fourth year student at the University of Toronto, pursuing a specialization in Peace, Conflict and Justice Studies and a minor in French. Outside of class, she works for Canadian federal government, and manages an environmentally sustainable and student-run café on campus, seeking to encourage local and green food service in the community.