Two days until touchdown: COP21 from a Canadian perspective

With just two days remaining, the world is holding its breath as delegates from over 190 countries stride towards a “make or break” agreement on climate change. The flurry of happenings in Paris have swept international headlines, with competing ambitions from conference delegates and consistent pressure by thousands of civil society actors. To make sense of the fast-paced conference proceedings, we spoke with Laurie Simmonds, GreenPAC Board member and CEO of Green Living Enterprises, who has been on the ground in Paris since Day 1. Here are her responses to the questions we asked. 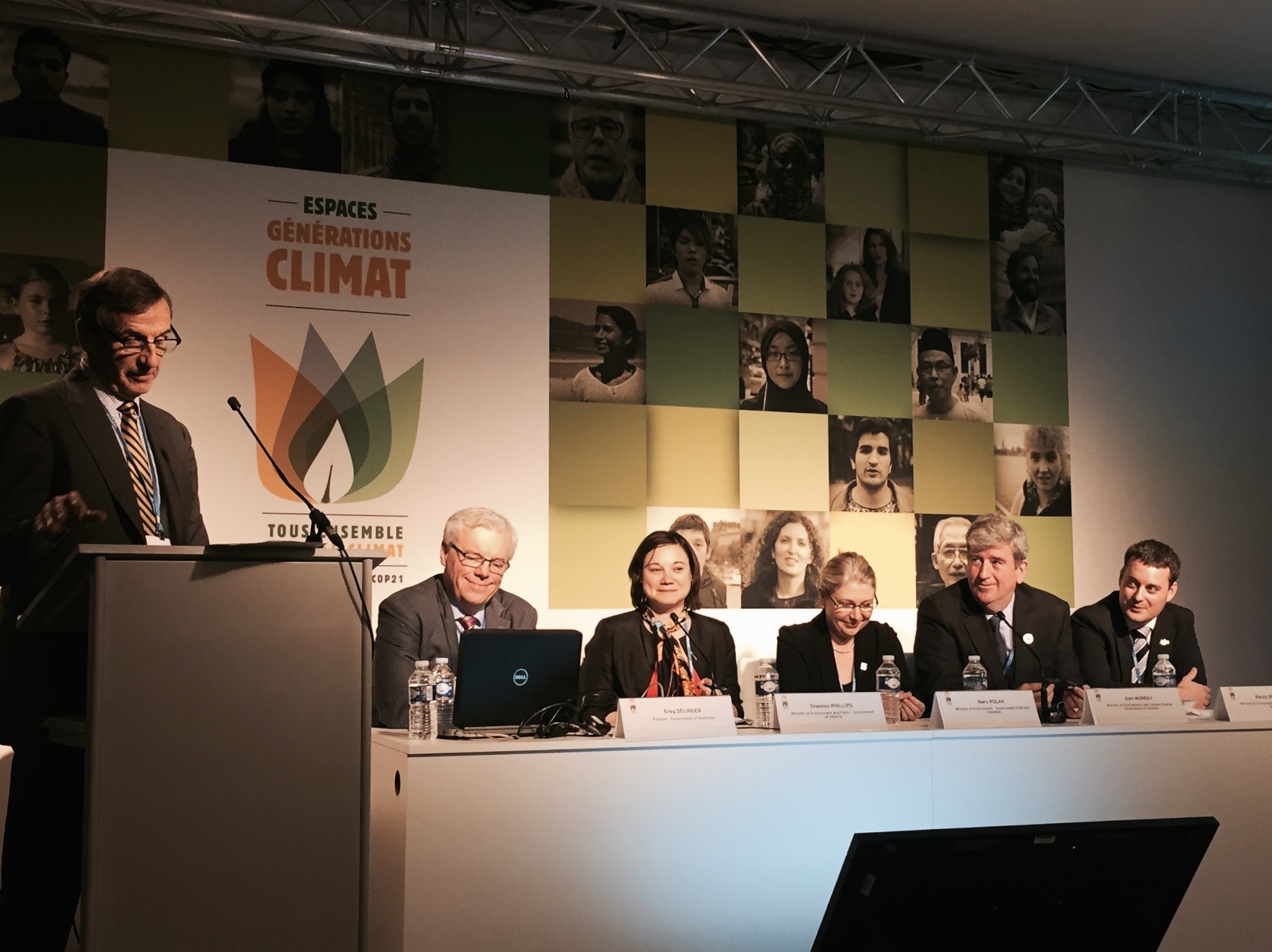 What progress has been made by the Canadian delegation to achieve decarbonization goals, both nationally and globally?

On Day 1, Prime Minister Trudeau took the stage to announce, "Canada is back!” Premiers from Quebec, Ontario and Manitoba and Environment Ministers from across Canada have formed a united front here at COP21 in Paris to prove the Prime Minister’s words to be true. Immediately following, Minister McKenna shocked the world this week when she announced that Canada endorsed a tougher 1.5 degree Celsius limit to global warming. This was quickly followed yesterday with Quebec Premier Philippe Couillard, Ontario Premier Kathleen Wynne, and Manitoba Premier Greg Selinger’s announcement that they plan to link their cap-and trade systems and join them with California’s.

What were the benefits of having the premiers attend COP21, and do you think it opened the door to better federal-provincial partnership to cut emissions?

It was a strong statement that the work is to be done by sub-nationals. The federal governments will make the commitment to targets but the sub-nationals have to get it done. Canada is showing the world how it can be done by forming coalitions.

How have you seen civil society actors get involved in the climate conference? Has their involvement influenced the negotiations, and have they developed strategies of their own?

They are an important part of pushing forward a strong deal by attracting media and lending a world-wide voice on the issues. There are demonstrations daily from thousands of civil society actors. A massive group of Indigenous leaders floated down the Seine near the Eiffel Tower to demand real climate solutions. Our own Canadian Youth Delegation has a loud voice here with daily actions and campaigns such as “Keep it in the ground” and “Don’t Cop Out.” The countries who have contributed the least to climate change and who are now feeling the largest effects of it have thousands of NGOs getting out their stories of rising sea levels and habitat loss. The Pope has spoken out in support and illuminated the Vatican with a light show of beautiful nature imagery in support of a strong outcome. There’s real momentum here and it’s powerful to see.

Vancouver's Greenest City Action Plan has won the C40 Cities Award at Paris at COP21. How important will municipal leadership be in making the transition to a green economy?

Economists now calculate that if cities invested in bikes, walking, more efficient transportation, efficient buildings and waste management, this low-carbon future could save them $17 trillion a year. Cities have been on the main stage with that message and have attracted international media with celebrity endorsements from Robert Redford and Leonardo DiCaprio in the process. Cities have demonstrated that their commitment to reducing greenhouse gases is crucial to the sub-nationals’ level of success in achieving their country’s targets.

What were some examples of leadership shown by GreenPAC endorsed candidates in Paris like Elizabeth May and Nathan Cullen?

Elizabeth May is consistently a hard working delegate. She is tirelessly attending from dawn to dusk pushing for ways to achieve a successful deal and contributes praise and punches at every turn. Elizabeth really cares. See her emotional interview on CBC.

Nathan Cullen provides strong and regular participation and works hard to support the goal of 1.5 degrees while keeping the conversation focussed on the hard part which is to make a plan to achieve this target. GreenPAC should be proud of who we helped get to Paris.

Given that the security environment in Paris is on high alert - a very different situation than we would have imagined for COP21 prior to November 13th - how have the logistical aspects of COP21 changed?

During my first day I was shocked to learn that climate marchers were teargassed, coupled with the sight of a huge military and police presence on the streets, busses, trains, and subways. Massive rows of airport-like security stations process the 40,000 participants at the entrance and exit each day to Le Bourget where the negotiations, side events and pavilions are housed. In downtown Paris, we have been evacuated from buildings and searched at the entrance to every store and restaurant. There are military bunkers overlooking Le Bourget. There is no question that the current state of emergency lends a little tension but we all feel very safe and we admire the Parisians who are pleasant and relaxed.

Have you had a chance to talk to observers from other countries? How is their perception of COP21 similar to or different from the Canadian perception?

It is a united feeling that COP21 is very different from the last 20 conferences. For example, this agreement will be applicable to all 195 countries. This is significant progress considering the Kyoto Protocol was only applicable to 5 or 6 countries. Also, prior agreements were all about mitigation. There is a reference in the text to a quantitative goal this year with over 80% of INDCs (Intended Nationally Determined Contributions) having adaptation references in them.

Have people been talking at all about climate refugees, and plans to mitigate the effects of their mass migration?

Mass demonstrations and separate side events are keeping this top of mind daily. Adaptation to the rising sea levels and loss of habitat are threatening the survival of entire countries. Migration is an eventual reality and countries who have contributed the most to the problem are negotiating the shared financial responsibility needed to help the countries that have contributed least to climate warming, but who are experiencing the most devastating effects.