This is a guest blog written by Pam Foster. The opinions expressed in this article are of the author’s, and are not necessarily reflective of the views of GreenPAC.

I grew up under the nuclear shadow. I cannot remember the names of my middle school teachers or very many kids in my class, but I remember a group of older students coming from somewhere out east who showed us If You Love this Planet by Dr. Helen Caldicott and talked about global extermination.

I remember graffiti around Edmonton, where I grew up, of the Statue of Liberty pointing a gun and the stenciled words “10 minutes to midnight.”

It was created by scientists involved in making the nuclear bombs used in World War II. It is maintained by atomic scientists. The closer they set the Clock to midnight, the closer the scientists believe the world is to global disaster. 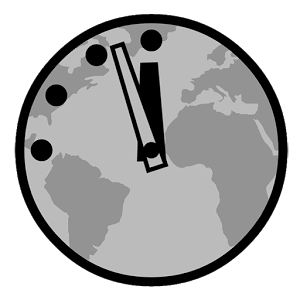 In 1984, the year I started high school, it was three minutes to midnight. I thought the world might come to an end. I was angry at the Baby Boomers with their fingers on the button. When I first heard the term Generation X for my generation I assumed the X must stand for X-ray as in radiated.

My anger and fear turned to hope in university where I had the honour of taking a class taught by the Honourable Doug Roche, former Conservative MP and Canada’s Ambassador for Disarmament and about-to-be Senator. He talked about action and political will — he had it in spades and so did the world. The United States and Soviet Union signed arms treaties, the Berlin Wall fell. Preparations were underway for the first Earth Summit, led by a Canadian. By the time I finished university in 1991, the doomsday clock was 17 minutes to midnight. I could live with that.

Fast forward 25 years to today. The Doomsday Clock is again at three minutes to midnight. THREE minutes to global destruction. Primary reason cited for moving the Clock this past January is the continued lack of global political action to address global climate change.

I think about my kids, Generation C. C for connectivity, but also for climate change, chaos and carbon. We need action and political will in spades and with speed to stop global warming.

I am supporting GreenPAC because we need more strong political leaders who are driven to take action to protect the planet.

The Honourable Doug Roche, O.C., gave a speech February 26, 2014 in Washington D.C. at a conference held by parliamentarians for nuclear non-proliferation and disarmament. He said:

Advocacy by parliamentarians works. Parliamentarians today can and must use their unique position in government structures to push for humanitarian policies to protect life on earth. Close the rich poor gap. Stop global warming. No more nuclear weapons. That is the stuff of political leadership.

If you are interested in learning more about how GreenPAC will help elect environmental champions sign up for updates.

- Pam Foster works in public affairs in Ottawa and is a mother of three Gen C'ers.