Solar Innovation In Israel : Making use of the desert sun

This blog was written by Danielle Pal, an undergraduate student at The University of Toronto. The opinions expressed in this article are of the author’s, and are not necessarily reflective of the views of GreenPAC.

In the utmost arid climate, with temperatures rising well above 40 degrees and with its surroundings comprised of solely sand and the Jordanian border, lies Kibbutz Ketura in the southern Negev desert. The Israeli desert maybe not be the first place that comes to mind when someone says “environmental leadership” or “solar innovation”, especially when cheap natural gas exploration off the Israeli coast is making headlines. However, the region is home to Israel’s largest solar fields, and soon to be the world’s largest solar tower. This region is drawing both on the strength of the desert sun, and the sustainable style of living characteristic to the communes found in the area.

“Kibbutz” of Kibbutz Ketura describes a community living structure that was very popular in the early days of Israel, traditionally based on agriculture. Today, most Kibbutzim have privatized, but Kibbutz Ketura has remained true to its communal roots, still embodying a non-hierarchical system and shared resources. In Kibbutz Ketura, community and sustainable living are embodied at its core.

As a third-year Environmental Studies student at the University of Toronto, I spent a week of my summer research trip in this Kibbutz to study their renewable energy initiatives, and traveled in the surrounding region to investigate other sustainable practices. 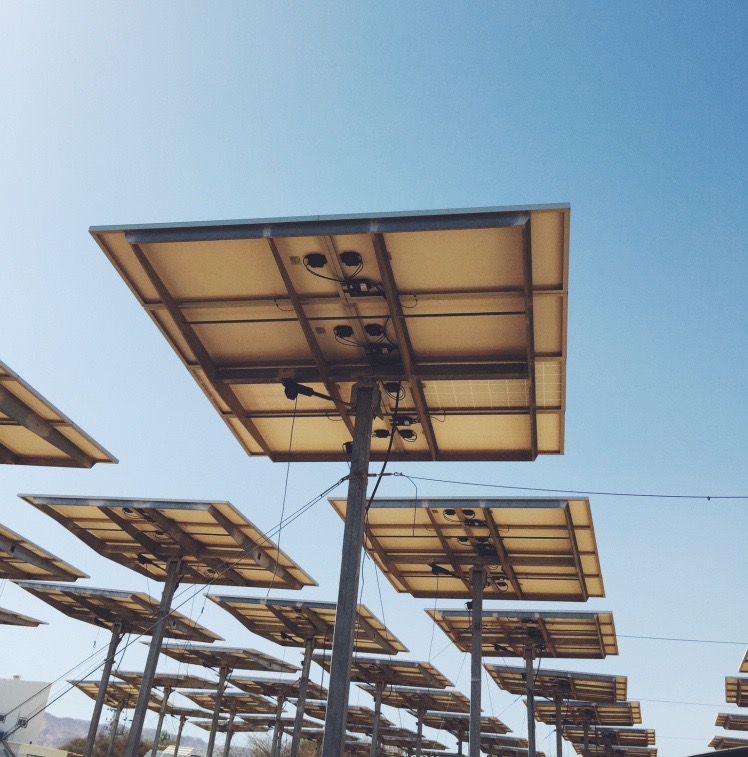 The first tour I was given was of a project called “Ketura Sun,” which aimed to install 18,500 photovoltaic solar panels beside Kibbutz Ketura, and would mark the first solar field in Israel. Ketura Sun produces 9 million kilowatt hours per year, and is projected to offset the production of 125,000 metric tons of carbon dioxide over the course of 20 years; this gives it the equivalent effect of planting 180,000 trees.

Not only is Ketura Sun groundbreaking for being the first solar field in Israel, but it is also is very innovative and home to cutting-edge maintenance technology. Our tour guide took us to the solar field, just as the sun was setting, to show us how the solar panels are cleaned. When the solar field was initially created in 2011, it took two weeks to clean all of the panels. Now, each panel has its own robotic cleaner (run off its own solar power) that runs every evening. Since this technology allows for more frequent cleaning, it increases the longevity and efficacy of the solar panels.

After the success of Ketura Sun came Ketura Solar - an adjacent solar field that has 110,000 photovoltaic solar panels, and can produce 40 megawatts of energy. This solar field has the potential to fulfil the energy needs of Kibbutz Ketura and surrounding Kibbutzim, and a substantial portion of energy to the largest city in the region, Eilat. Following these initiatives, five other solar fields were built, all with well over 20,000 solar panels in each field.

My tour then brought me to what will be the world’s largest solar tower. I saw the construction this solar tower, another innovative commitment clean energy in the region, which will rise 240 m taller than Paris’s Montparnasse tower, and London’s Gherkin. A solar power tower produces concentrated thermal energy through focused sunlight, via the use of several rotating mirrors.

Around 60% of Israel is desert, with an average annual solar irradiance of 2000 kWh per square meter. If the proper investments are made, Israel has the capability of surpassing its goal of 10% renewable energy use by 2020 and 17% 2030, and weaning off of its current reliance on coal and natural gas. However, despite the potential of the region for solar development, a realization of 10% renewable energy requires a heavy investment and subsidization from the current government, which is not happening fast enough. Israel is in need of environmental leadership.

The recent surge in renewable initiatives in the Negev gives promise to both Israel’s energy security and protection of its environment. Transitioning an arid and unused space into a hub of renewable energy practices and initiatives has the potential to reshape the energy and environmental course of the country, and set an example for the surrounding region.

*The initiatives that I mentioned throughout this post are sponsored by Eilat-Eilot Renewable Energy, which focuses on developing green energy projects in the Eilat-Eilot region in the Negev.

Danielle Pal is an Environmental Studies and Psychology student at the University of Toronto. She is currently stationed in Israel, working for the Environmental Regulation Clinic at Bar Ilan University doing comparative policy analysis on oil and gas in the G8.