This is a guest blog written by Paula Boutis. The opinions expressed in this article are of the author’s, and are not necessarily reflective of the views of GreenPAC.

Meet Paula Boutis, environmental lawyer and member of the GreenPAC Board - she's helping us jumpstart environmental leadership in Canadian politics. We asked her to reflect on how she became interested in taking care of the world around us. 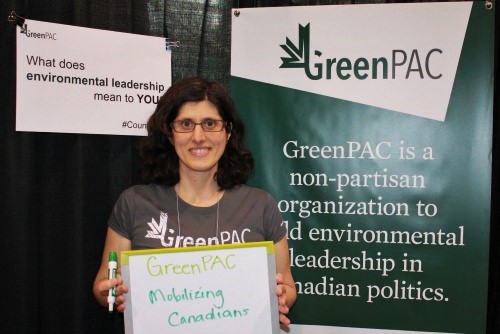 My high school chemistry teacher saw it as his duty to ensure that when we talked about petroleum, we also talked about the environmental implications of the petroleum industry. I still remember my grade 13 final chemistry exam, where I wrote about the over 300 known pollutants in the Great Lakes, just having read an article about it. Before high school was over, I declared I would become an environmental lawyer. While there have been a few twists and turns along the way, I did wind up doing just that.

It didn't take long for me to realize, however, that practicing environmental law — whether public interest law or for the private sector — meant working within the legal framework that existed, no matter how inadequate that context might be. And it’s in this way that I came to recognize the importance of the policy context and the political sphere in which that exists.

But equally significant is that in less than 5 years, critical environmental legislation that had been in place for decades has been dramatically revised and  significantly weakened. This includes the Fisheries Act, the Navigable Waters Protection Act and the Canadian Environmental Assessment Act.

These changes were made stealthily, buried in omnibus budget bills.

So when Aaron Freeman approached me about becoming involved in GreenPAC, to build environmental leadership in Canadian politics, I knew I had to participate. We are at a critical juncture and need to reverse our now humiliatingly low standing in world for environmental standing. We are now "dead last" where we were once world leaders. We need GreenPAC because environmental organizations and individuals can't alone make Canada the world leader it once was: this is only possible when our elected representatives make it a top priority.

Today, when we face so many decisions about climate, water, air quality, and habitat and species loss, we need politicians on our side, ready to act and ready to enforce.

GreenPAC is a new approach to ensuring that strong political candidates with environmental credentials, across major parties, are supported and elected by citizens who care about environmental protection. Please fill out our survey and get involved. Help us build environmental leadership in Canadian politics.

— Paula Boutis sits on the GreenPAC Board. After completing her Master of Science degree, Paula studied law and has been practising law in Ontario since 2001. She is currently practising with Saxe Law Office, a highly respected environmental law boutique in Toronto. Paula has been a dedicated volunteer in the environmental movement since the 90s, and has served on several boards of environmental organizations.