There was a brief, shining moment in Ottawa last month that summed up everything we’ve been trying to achieve with GreenPAC since it got off the ground in 2015.

We began hosting an annual breakfast on Parliament Hill in 2016, and this year’s event took place October 19. The format and the setting supported what GreenPAC is trying to achieve in several ways: the breakfast spotlighted our endorsed candidates’ environmental achievements since they entered the House of Commons, brought the MPs together with many of our most active volunteers and supporters, and provided a venue to share ideas and successes. 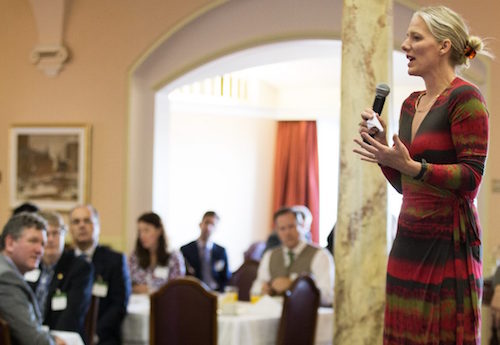 This year’s breakfast could not have been a better showcase for the cross-partisan dialogue at the heart of GreenPAC’s mission.

The guest list included 15 or so MPs from all four parties in the Commons, including several who had not received our 2015 endorsement.

The 135 registered participants made for an enthusiastic crowd that filled the Parliamentary restaurant.

The breakfast was hosted by MP Michael Chong (CPC, Wellington-Halton Hills), the first of our endorsed candidates to seek the leadership of a national party.

Both Chong and our keynote speaker, Environment and Climate Change Minister Catherine McKenna, highlighted the cross-party dialogue and mutual respect at the heart of environmental policy-making, even if it’s rarely visible in the daily news coverage from Parliament Hill.

"We need to get these policies right,” Chong told participants. “And that means all the parties need to put their best foot forward on how we can best protect the environment and grow the economy. Because if we don’t, we risk undermining the political support that’s required in order to keep these policies in place for the long term.”

McKenna acknowledged Chong’s leadership on climate change, including his proposal for a revenue-neutral carbon tax, that fit within his party’s political philosophy.

She thanked Green Party leader and GreenPAC endorsee Elizabeth May for constantly pressing the federal government to push farther, faster on environmental policy—and for pointing out some of the simple, basic steps Ottawa can still take (beginning with recycled paper for December holiday cards!) to reduce the environmental footprint of government operations.

Most of all, the conversation on Parliament Hill affirmed the important role GreenPAC is already playing, and will continue to play, in building environmental leadership across all parties, and in every federal and provincial legislature.

Every Parliament will bring together elected representatives with widely differing political preferences—if not, we’ll have a bigger problem with the shape of our democracy. But whenever those legislators can come together on environmental priorities that are above day-to-day politics, we know we’ve had an impact.

And that’s what made the 2017 GreenPAC breakfast an incredibly powerful and affirming snapshot of the Parliament our Parliament could be.

Aaron Freeman is Founder and President of GreenPAC.

Click here for profiles of the candidates GreenPAC endorsed in the 2015 federal election.

View the photos from the breakfast.