In the Ontario Campaign, Millennial Voters Make the Difference

As the Ontario election enters its final week, one of the big questions on pundits’ minds is how millennials—that coveted group of younger voters born between the early 1980s and early 2000s—will shape the campaign result.

It’s the first campaign ever where “unpredictable millennial voters” outnumber baby boomers on the list of eligible voters. As CBC pointed out in a weekend analysis, "if they are engaged and they turn out and vote, and turn out collectively for one party, they can shift the outcome," But banking on youth voter turnout is often presented as a risky proposition.

Here at GreenPAC, our volunteer and supporter base is overwhelmingly made up of young, passionate millennials. They defy the stereotype of apathetic youth disengaged from electoral politics. Young GreenPAC supporters come from diverse backgrounds and experiences but share a common thread: they value environmental action as a top voting issue this election. As a millennial myself, I set out to talk to fellow youth environmental advocates to understand why they are impassioned to act on environmental issues, why this election matters to them, and why politicians should take note.

They’re Worried About Their Future

For many millennials, taking action on environmental issues is just common sense. By the time we were coming of age, climate change was already a part of the mainstream political discussion. Millennials understand that the world we are inheriting is fraught with precarity, environmental and otherwise, and we’re understandably concerned.

“We’re running out of time,” says Heather Crochetiere, a young scientist and GreenPAC supporter. “We’re going to be the ones who will have to continue to clean up the mess that we’ve created, and that we’re continuing to create today.”

University of Toronto student and GreenPAC volunteer Osaze Blake is similarly worried about his own future, and that of his future children. “As a young person, I’m going to be living in this country, in this province, for however many decades long, so the environment is obviously an important issue,” he explains. “I plan to live here and have my kids live here too, so I can’t leave a big mess behind.” 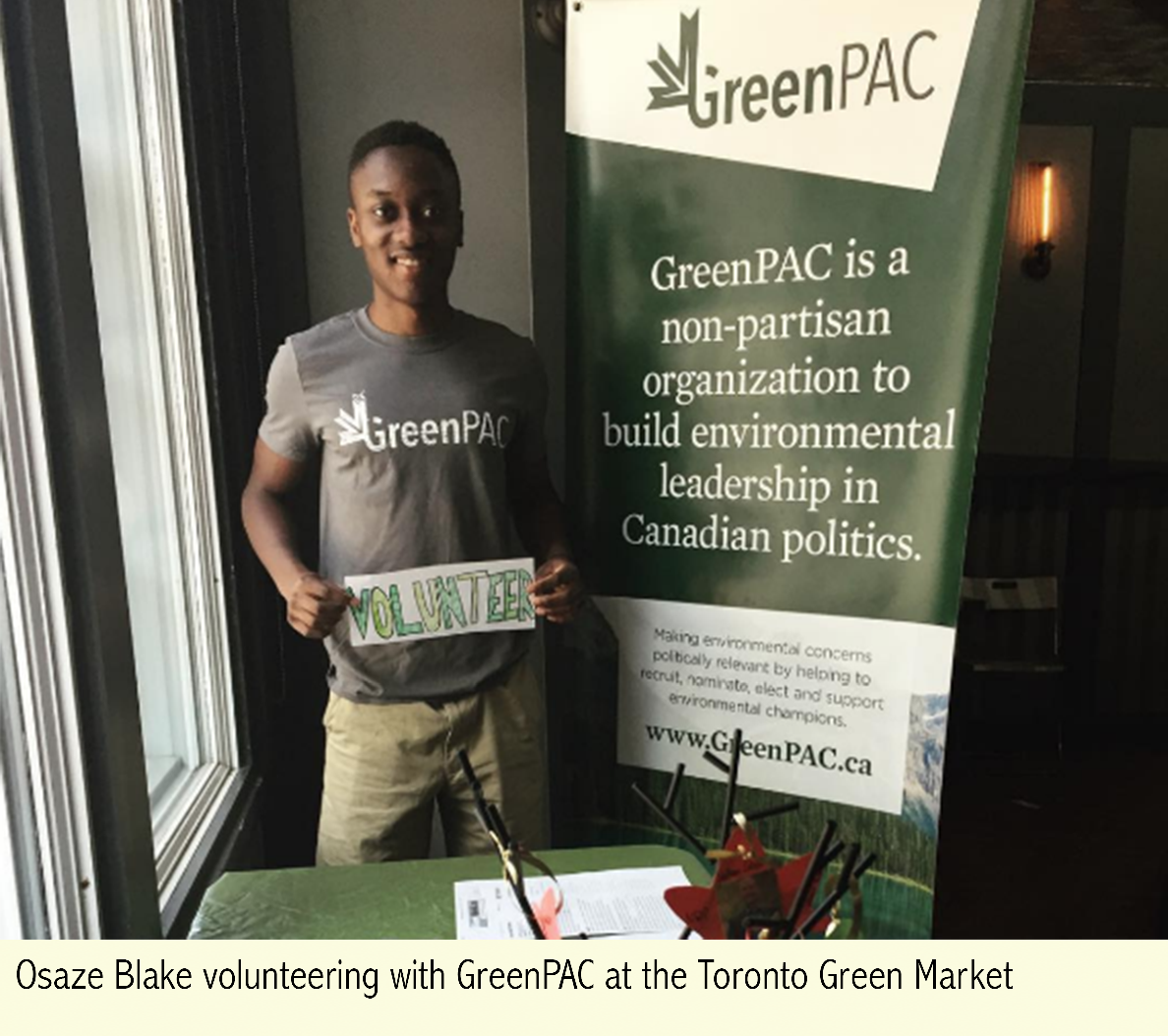 Heather and Osaze are both adamant that the voting decisions they make today will have long-term impacts for young people in Ontario. And millennials see a crucial role for governments to play in protecting their future. As GreenPAC volunteer Sam Anderson puts it, “government has the power and obligation to bring society in the right direction”, and voting is an easy way for young people to help decide who forms government.

A key feature that separates millenials from the rest of the electorate is that they are “more global-centric and issues-based” when it comes to voting preferences, and more drawn to social issues than older generations. Environmental issues are both global and social in nature, a reason young GreenPAC supporters cite for their dedication to environmental advocacy.

But the global focus doesn’t mean young voters are not concerned with provincial elections. As many of our supporters pointed out, decisions on environmental legislation in Ontario can have cascading effects nationally and internationally.

“Ontario carries special significance in Canada as the country’s most populous province,” says student and GreenPAC volunteer Lautaro Grilli. “This election in many ways sets the precedent for next year’s federal election. The stakes nationally are higher. Federal and provincial governments often look to each other for new ideas,” so “progress in Ontario may inspire progress elsewhere.”

Heather echoes that sentiment, pointing to the jurisdictional power of provinces to enact environmental change. “A lot of environmental management is at the provincial level,” she notes. “If we have a provincial government that isn't supportive of a sustainable environment, we may see the impacts more clearly than with other jurisdictions.” 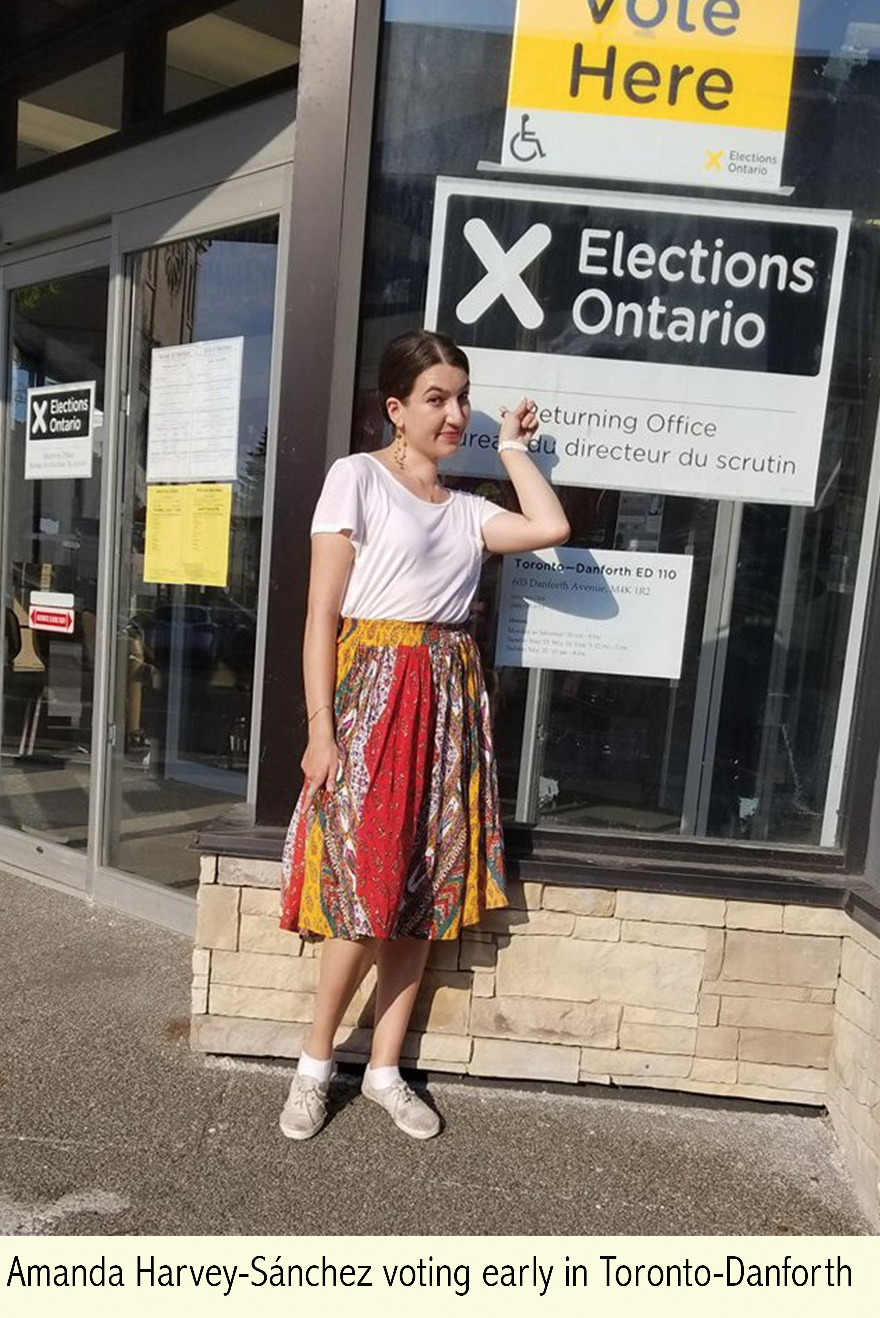 The Ontario election, and the federal campaign that follows, could be a key moment where we see a shift in the demographic that calls the shots politically. As Lautaro explains, “2018 is the year many people born in 2000 will be casting their first ballots. This is a chance to show politicians that the young generation appreciates and will reward [environmental] efforts.”

Young environmentalists are aware of the power their generation holds and are ready to act on it this election. “We are the generation that decides what the world will physically be like for our families,” says Sam.

But while there’s a lot on the line, it won’t materialize without others like Lautaro and Sam taking their passion to the ballot box. “I would remind my peers that as a generation, we have ambitious and promising ideas about how the world should be,” Lautaro says. “By voting in elections, we work towards making that dream a reality.”

Asked what she would say to anyone who discounts the millennial generation as apathetic, Sam has a simple response: “I would say we should get to the polls and prove all those people wrong.”