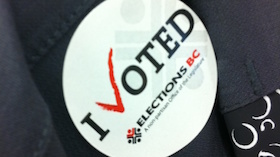 If you’ve been thinking about what you can do to help build multi-party environmental leadership in the British Columbia election, it’s now or never.

Election Day is May 9. It’s a tight race. Candidates and their teams are planning their strategies for the last days of the campaign.

Which means this is precisely the moment for you to make a difference.

Your dollars can go a long way. Look no farther than the last provincial election for proof.

In 2013, our endorsed candidate in Vancouver-Fairview, George Heyman (NDP), only won his seat by 5%. He’s been a strong environmental leader in the legislature ever since.

Our challengers in Boundary-Similkameen and North Island, Colleen Ross (NDP) and Dallas Smith (Liberal), are running in ridings
their parties lost by 7.6 and 8.5%, respectively. Which puts them both within the next tier of seats their campaigns are hoping to pick up this time.

Our three other incumbents—Jennifer Rice (NDP), Jordan Sturdy (Liberal), and Andrew Weaver (Green)—had wider margins of victory last time. But any campaigner will tell you that you never take a big lead for granted. And you never stop raising grassroot donations to support your candidate.

If you live anywhere in British Columbia, whatever your political persuasion, you can direct your campaign dollars to a candidate with a proven track record for environmental leadership.

We endorsed our candidates after our BC Expert Panel took a close look at their past experience. We’re pleased, often amazed, by what they’ve achieved.

And we’re confident—with your donation today, and our continuing relationships with the incoming group of MLAs—that they’ll work across party lines to support the strong environmental legislation the province needs and deserves.

But the next week will make the difference.

The province’s political contribution tax credit makes it easier to dig deep and give generously.

So the opportunity is right in front of you. But it’s now or never.

If you haven't completed the Candidate Matching Tool, take five minutes and get it done.

Once you've found your match...you know what to do next.

And on the morning of May 10, get set to wake up to a new generation of environmental leadership in British Columbia.