Changing the Balance of Power

It’ll be a couple of weeks before the results of the British Columbia election are confirmed. But in the hours after the polls closed in the provincial election, the balance of power appears to be shifting in a way that goes beyond the seat count in the provincial legislature.

When the votes were counted, the province was looking at its first minority government since 1952, with GreenPAC endorsee and veteran climate scientist Andrew Weaver (Green, Oak Bay-Gordon Head) holding the balance of power with three seats. But even that doesn’t tell the whole story.

At the moment, Christy Clark’s Liberals hold 43 seats in an 87-seat legislature, one short of a razor-thin majority, compared to 41 for John Horgan’s New Democrats.

Judicial recounts take place May 22-24 with at least one riding, Courtenay-Comox, going to the NDP by just nine votes.

So even the relative uncertainty of a minority government is still...relatively uncertain. If Weaver’s Greens do end up in control, it remains to be seen whether they’ll form a coalition government with either the Liberals or the NDP, or agree to support one of the other two parties on a negotiated policy agenda.

But there are two things we do know.

On election night, Weaver declared the neck-and-neck finish in the four-week campaign “a historic day for British Columbia," but it was clearly too early for him to indicate which of the other two parties the provincial Greens might prop up. 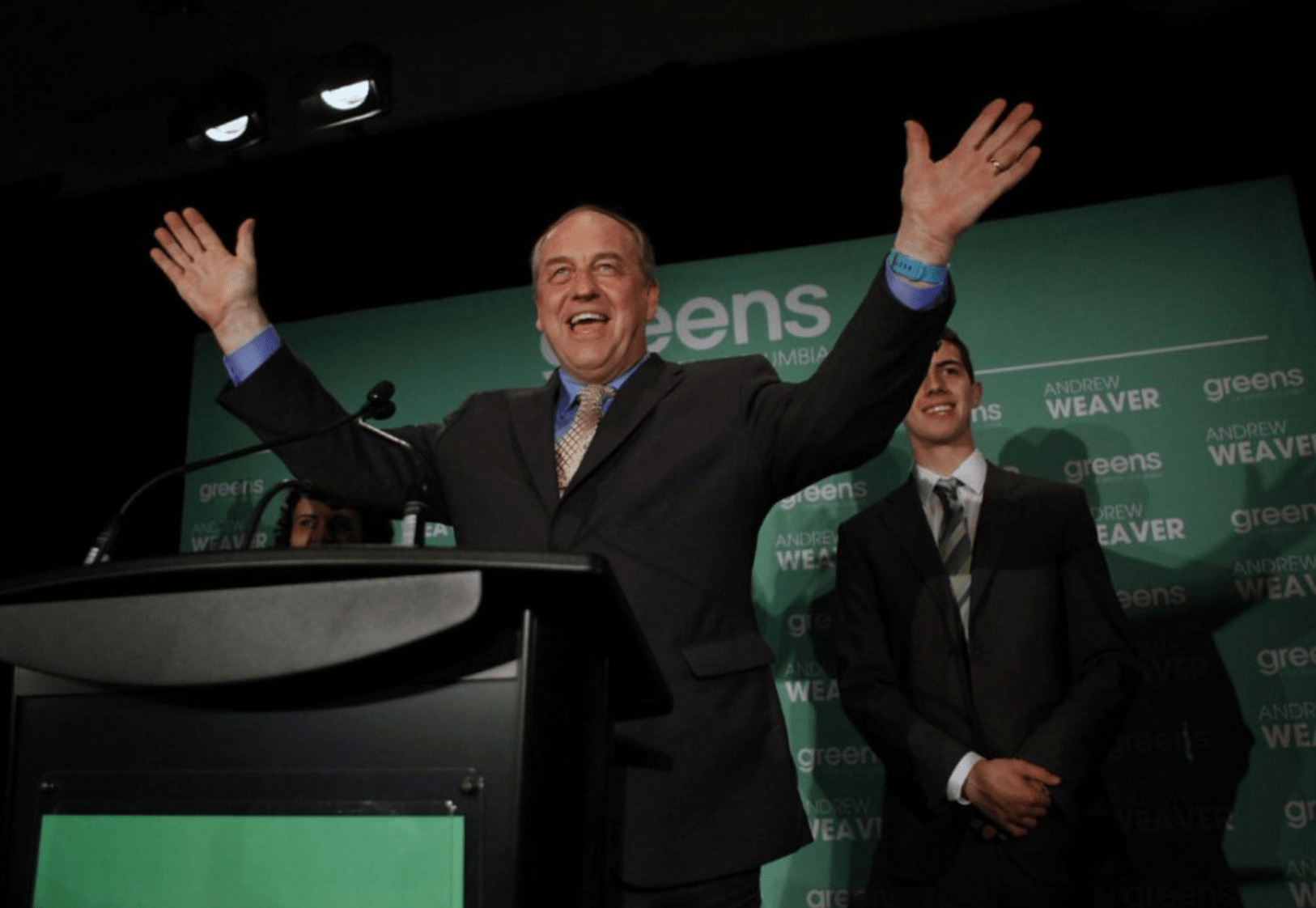 "I'm not answering questions like that,” he told media. “We're starting negotiations tomorrow." But first, as of 12:30 AM local time, "I'm going home."

A week earlier, in a Facebook Live interview with CBC, Weaver pointed to the big shift he would insist on in what was then seen as an unlikely circumstance—a minority legislature with Green control.

"We're open to coalitions. We're open to minorities. We're ready to work with anyone and everyone,” he said. But the price of Green Party support would be to abolish corporate and union donations in provincial politics.

"Without any question, that's a deal breaker,” Weaver said. “We've got to get the money out of politics."

In the weeks leading up to the provincial election, the New York Times picked up Democracy Watch co-founder Duff Conacher’s charge that British Columbia had become “the ‘wild west’ of Canadian political cash.” And those political donations often revolved around companies and projects with a heavy stake in provincial environment policy.

If B.C. does end up with a minority government, and if Weaver has his way, that will change. And GreenPAC’s unique model for mobilizing political support and donations will be way ahead of the curve.

When an election is called, we endorse candidates, then help mobilize the dollars they’ll need to win. But rather than pooling those donations, in the manner of a more traditional political action committee, we make it easy for individual voters to direct their contributions where they’ll make the most difference.

It’s a deliberately decentralized approach that empowers citizens. And it’s a model that could become a lot more important if B.C. does away with institutional donations.

The other overnight takeaway is that the environmental issues facing British Columbia are as urgent Wednesday morning as they were before the votes were counted.

Which means it’s as important as ever to build strong environmental leadership on all sides of the provincial legislature.

Four out of GreenPAC’s six endorsed candidates, all of them returning members of the last legislature, won their seats last night. Apart from Weaver, our successful candidates include: 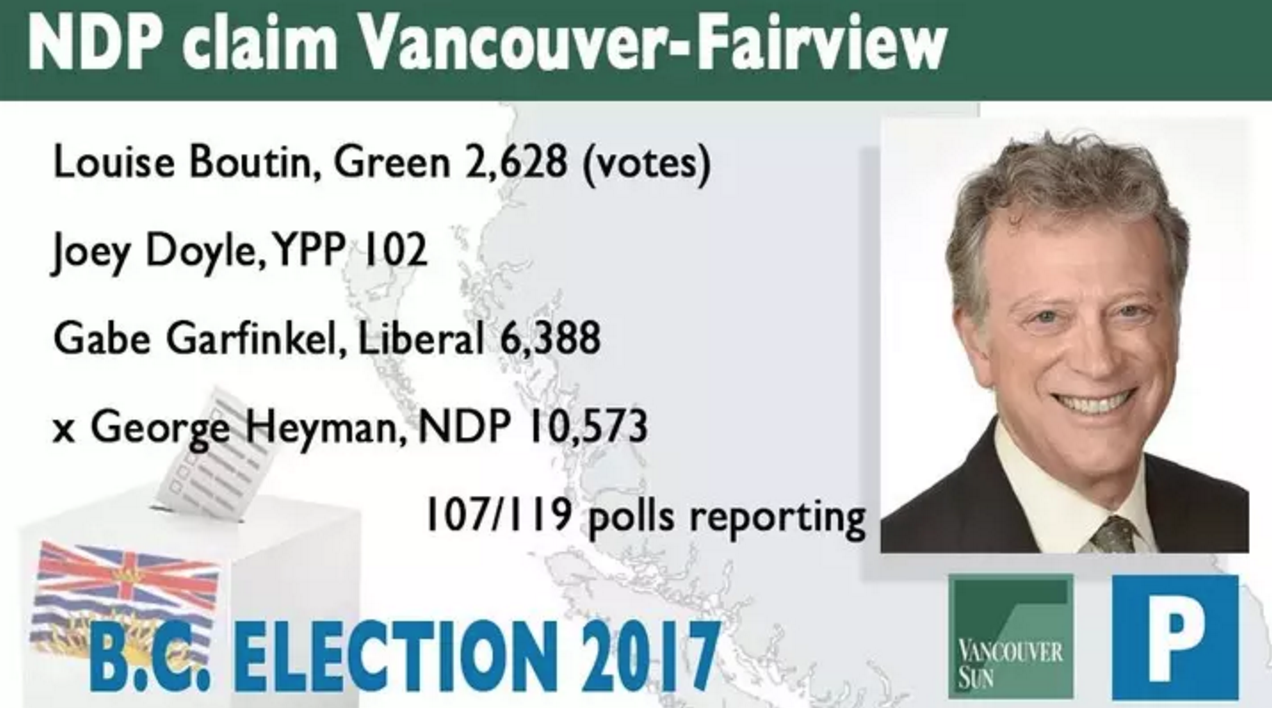 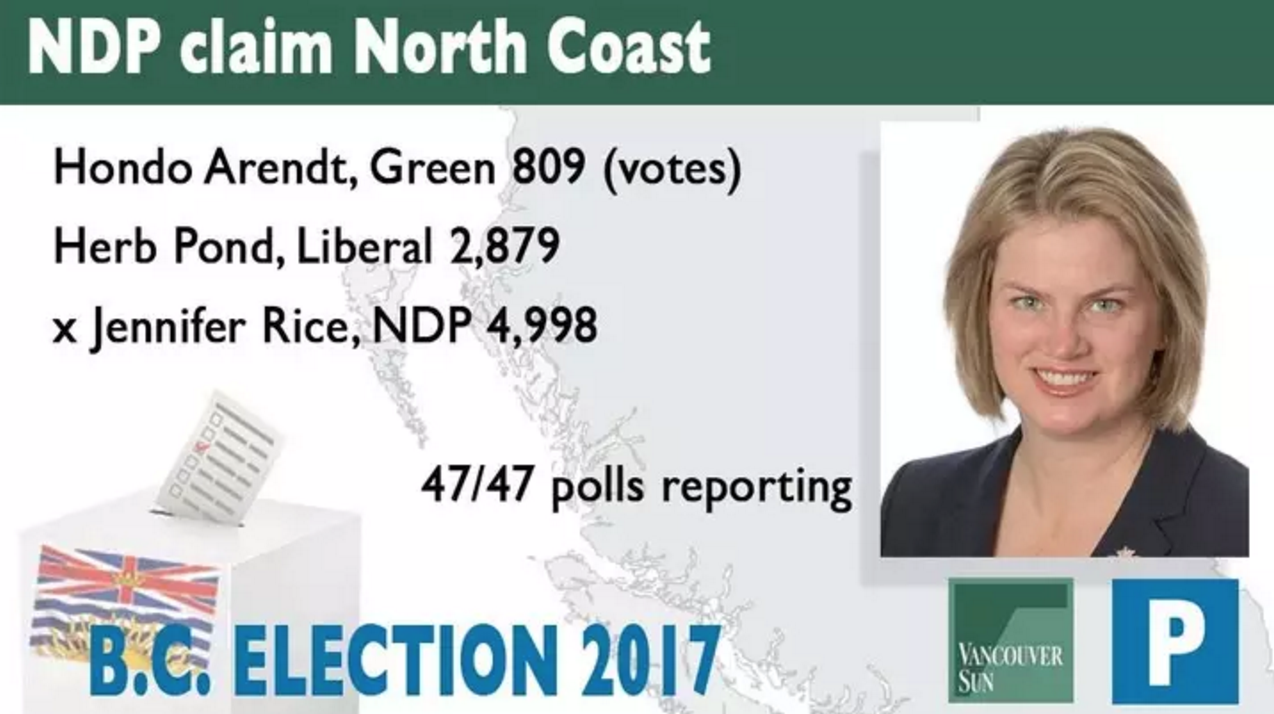 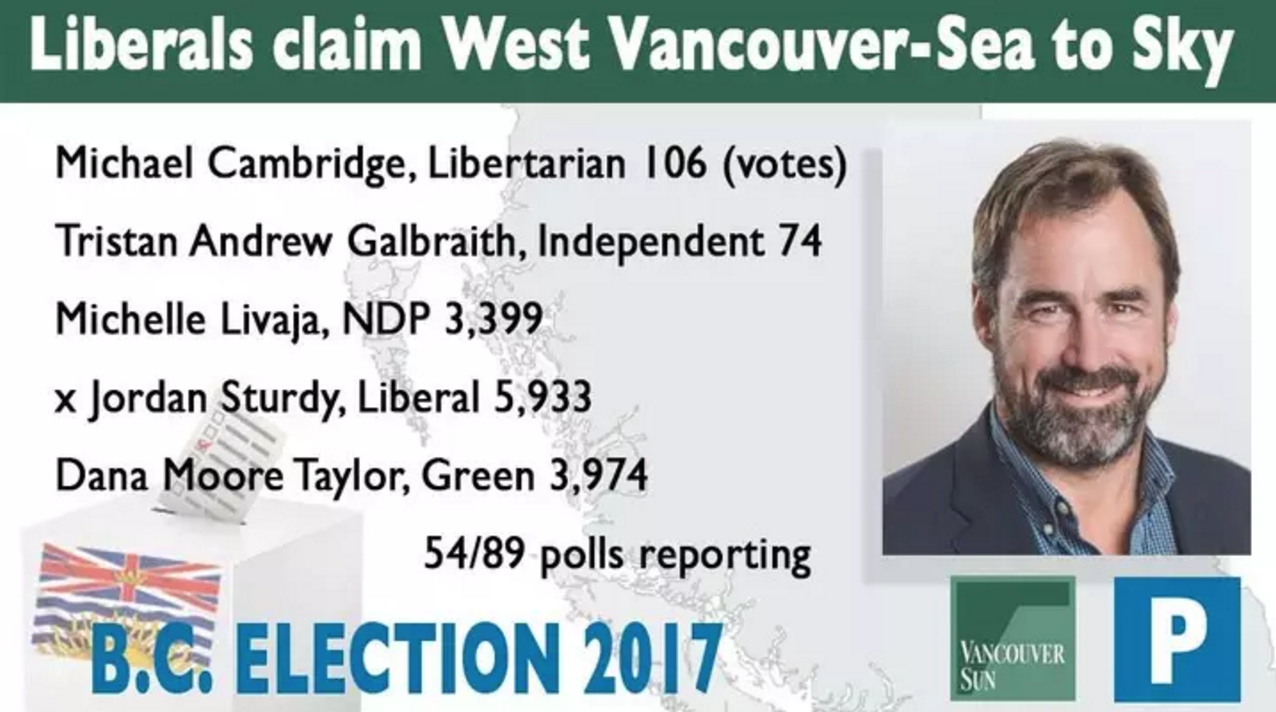 After the recounts, after the negotiations among the parties, the incoming government will form. A new Cabinet will be appointed. A Throne Speech and budget will be released. And at every step—whether the topic of the day is energy or the economy, health care or housing, agriculture or forestry—MLAs will be making decisions and choices that affect the environment.

And, more often than not, they rely on environmental services or natural capital that business-as-usual politics can too easily take for granted.

That’s why, whatever happens in the end, last night’s vote isn’t the end. With Weaver, Heyman, Rice, and Sturdy in the legislature, there’s a chance for environmental leaders to start talking across party lines, defining the environmental bottom lines they share, and planning legislation to protect environmental values that British Columbians across the spectrum hold dear.

It’s a chance. Not a guarantee. But with your continuing help—with your active participation, and your generous financial support—GreenPAC will be supporting our elected candidates whenever they try to move farther, faster on the environmental agenda that helped bring them to office. They won’t win every engagement. (Does anyone, ever?). But we’ll be watching for them to do their part to change the tone and focus of B.C. politics.